Today in Gosport’s Past:- on 11 October 1982, Henry VIII’s flagship “Mary Rose” was brought to the 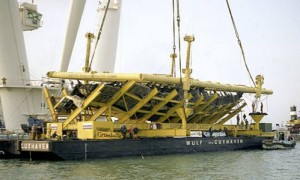 surface after 437 years of being at the bottom of the Solent.

As I’d been working on the Isle of Wight ferries since 7 November 1973, I’d passed the worksite (just south of Spit Bank Fort) several times a day for some years, but on the day of the lifting, it was my day off, so I took a couple of photos of the occasion on my TV…
on 10 June 1836, Henry Abinett was the first person in nearly 300 years to see the ‘Mary Rose” whilst diving to clear snagged fishing nets. Despite this, the wreck wasn’t rediscovered again until 5 May 1971 by a dedicated diving team, and the rest is, as they say, history.

It should be noted at this stage that I unsuccessfully applied for a job in the Mary Rose Museum, ditto HMS Warrior, ditto Explosion! Museum. I WAS offered a job in the Submarine Museum, but I had to decline, as it was unpaid, and involved 2 bus rides in either direction….