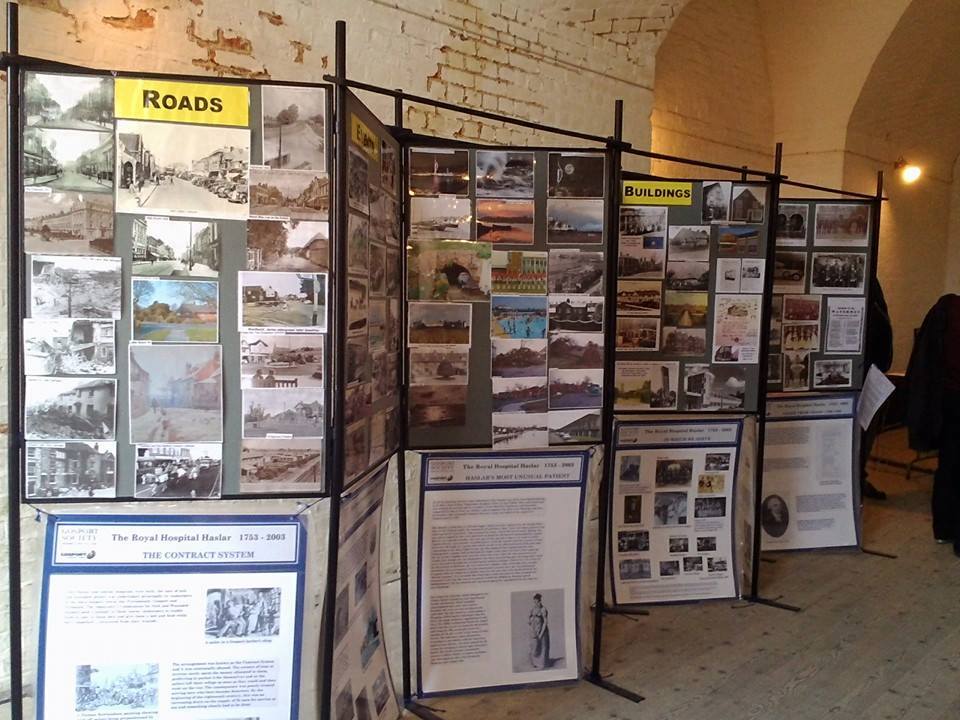 Today in Gosport’s Past:- on Saturday 11 April 2014, ‘The Gosport Area memories and photos, past and present’ Facebook group held its first exhibition of photographs, artifacts, and odds & ends in the keep at Fort Brockhurst. Admission was free, and visitors were able to visit the whole fort. It was a great success, and several hundred people passed through the gates that day alone. Everyone met friends old and new, and a jolly time was had by all. The exhibition was added to and improved for the subsequent open days in May, June, July, and the Heritage Open Days in September.

The exhibition continued to improve and expand throughout 2015 open days at the fort, although two days had to be canceled owing to circumstances beyond our control; nevertheless, over the remaining months, over 2000 enjoyed the experience over five Saturdays.

Unfortunately, in 2016, English Heritage took the decision NOT to open to the public on the second Saturday of Summer months, so our only exhibition at Fort Brockhurst during 2016 will be three days in September for Heritage Open Days, so make sure you all come along to see our New Improved Exhibition – we’ve got some new exhibition boards and many more old photos! Most of these photos were taken by visitors from the first day onwards, so credits to you lot…

2021 Update: The exhibition continued to held at Fort Brockhurst through to 2018.  During those 5 years, it was visited by many thousands of ‘The Gosport Area memories and photos, past and present’ Facebook group members from near and very far.  In 2019, the exhibition very successfully ran over 10 days at The Alverbank House Hotel.

The exhibition will come out from ‘lockdown’, be refreshed with some new old photos and stories, and be available for Heritage Open Days 10th-19th September 2021.  The venue will be announced soon!

Also Today in Gosport’s Past:-on 11 April 1999, the Ritz cinema closed its doors for the very last time. The Ritz Super Cinema was opened on 4 March 1935 to much praise, since it had a restaurant on the premises, where a chap could enjoy a 3-course meal for the princely sum of 1/6d (7.5p in feet & inches), the first film shown being “What Every Woman Knows” starring Helen Hayes (released in October 1934), and the cinema could accomodate over 1000 customers. During an air-raid on the night of 10 January 1941, The Ritz was badly damaged by bombing, and closed down. Since Gosport also had the Forum and Criterion cinemas, there was no great urgency to rectify things, but eventually it was completely rebuilt, and opened its doors again in October 1958, but without the restaurant, sadly. It became a very popular entertainment for many years, and was used for holding concerts on the odd occasion: Peter Skellern played there in the 80s, B B King & Horace Batchelor played there in August 1994, and Spike Edney’s SAS Band (with Roger Taylor from Queen) played there for ‘Spike’s Xmas Cracker’ concert on 16 December 1994. However, all was not well, and the Ritz closed on 30 October 1982, and remained closed until reopening in 1985. In later days, the condition of the cinema deteriorated; seats got torn & tatty, and stuffing was sometimes replaced by cardboard, and the Circle (upstairs) was closed. The situation was never resolved, and the Ritz finally closed on 11 April 1999. The very last film to be shown was “L.A. Confidential”, and the cinema (in later years its boast was that it was The Largest Big Screen on the South Coast) was demolished in August 2001. A sad loss to Gosport indeed, especially so since, despite promises otherwise, it’s never been replaced… At least we got a new Job Centre and an Iceland… Hmffff. Not much to show for a town which has seen SIX cinemas over the years (not including the short-lived St Vincent cinema). Yippee…. Here are some photos of it over the years, from beginning to end. Credits to original photographers, as ever.