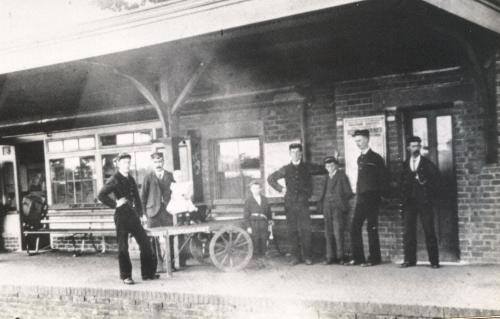 A DAY IN GOSPORT’s PAST (by Dave Rowland) :-  on 1 November 1865, a railway station was opened close to Fort Rowner, at Military Road, and was named Brockhurst. (Before we go any further, yes, we DO know that “Cockleshell Heroes” was filmed here – all 12 seconds of it….). This was to be the only intermediate station on the line between Fareham and Gosport, which had been officially opened on 7 February 1842, although the first trains actually ran on 24 November 1841, but a series of landslips, and a faulty tunnel north of Fareham stopped any further services operating for several weeks while the problems were dealt with. From the outset, the whole line was double track, so Brockhurst had an up and a down platform. (The standard rule for this classification is ‘up’ designates any line in the London direction, and ‘down’

denotes the opposite, and has been used universally throughout Britain since the beginning, so, rather oddly to my mind, a train heading to Newcastle from London is a ‘down’ train, despite the fact that, on the map anyway, it’s going UP. However, I digress). Brockhurst station was opened just four and a half months after the Gosport avoiding line to Stokes Bay (Lees Lane to Daisy lane, opened 15 June 1865); the down platform ran alongside Station Road, which until the station was built, was known as Queens Head Lane. The up platform was equipped with passenger facilities (waiting room, ticket office etc), and the entrance was by the station house in Military Road. With the level crossing right next to the station, it hadn’t been necessary to install a footbridge. In 1872, the large corrugated iron Garrison Church (for the troops in Fort Rowner) was built close to the station. At some early stage, a short spur led to a small loading dock on the opposite side of Military Road, directly opposite the station house. On 17 November 1893 permission was given to change the name of the station from ‘Brockhurst’ to ‘Fort Brockhurst’, owing to problems with passengers and/or their luggage getting confused with ‘Brockenhurst’ in the New Forest. It was also helpful for troops based at Fort Brockhurst to know where to alight from the train…
Other things were soon to change as well; a railway line was constructed from Brockhurst to Lee-on-the-Solent, and this was officially opened on 12th May 1894. It was more or less a separate railway; trains to/from Lee used a single bay platform behind the ‘up’ platform. The bay platform, although equipped with a headshunt and a loop for the engine to ‘run round’ its train, it couldn’t be accessed from the Fareham direction; trains/engines had to run southwest through the station (towards Gosport, then use the link line to the bay from the Gosport direction. The Lee line, after leaving Brockhurst, ran in an arc around the Garrison Church, then curved back around to run parallel, and close to, Military Road, on the Gosport side. There was a level crossing in Cambridge Road, close to Military Road, not to be confused with the OTHER level crossing in Cambridge Road – that was on the Gosport line. There were originally two intermediate halts (unmanned stations) on the Lee line; Privett, which was soon renamed Gomer Halt in order to being mistaken for Privett station, on the

Meon Valley line, and Browndown Halt, close to the familiar army camp there. A third halt was opened at Elmore, but not until 11 April 1910. There were level crossings near at the south end of Military Road, Gomer Halt, and Browndown, and another near Lee. The line curved left near the end of Military Road in order to curve back towards Lee. The line saw its last passengers on 31 December 1930, and the goods service ended on 30 September 1935. In the mid sixties, a new road was constructed between Privett Road (formerly called Bury Road all the way to where The Cocked Hat is now) and Browndown, this was built on the route of the disused railway line.
In 1934 the line from Fareham to Gosport was singled – the down line was removed, except for a section kept on near Fareham, used as a siding, and a lengthy passing loop through Fort Brockhurst station, largely to enable goods movements, which involved a degree of shunting; goods were delivered to the station house (coal, etc), and the bay platform had been left for such things to be made possible.
The station had a moment of glory in November 1952, when our brand-new, not-yet-officially-crowned Queen alighted there for a visit to HMS Daedalus; her Pullman train was hauled to & from Fort Brockhurst by Southern Railway Bulleid ‘West Country’ Class 4-6-2 34011 “Tavistock”. Unheard of! The glory wasn’t to last for long, however; on 8 June 1953, all passenger services to/from Gosport ended, and Fort Brockhurst station was closed. Rather ironically, and typically with a lack of foresight, exactly one week after closure, the Queen’s Coronation Fleet Review at Spithead took place, and many thousands of visitors flocked to the area to witness the spectacle. Guess how they travelled – by train, of course; there were over 80 extra trains to Portsmouth for the event – they could have come here!

After closure, the goods service to Gosport and Clarence Yard continued, but that didn’t make much difference to Fort Brockhurst; it got dilapilated, and things only got worse after goods services ended on 6 January 1969; eventually, all the facilities, and the signal frame, crossing gates, waiting room, etc, all got demolished; now just the station house itself remains, and the platforms. It’s good to see the house lived in, but I still think it looks odd without chimneys. Oh – I always thought that it was very peculiar that despite being directly next-door to Fort Rowner, it was actually called Fort Brockhurst (a bit of a hike away)…. Oh well. Here’s a whole gang of pics; credits to original photographers.