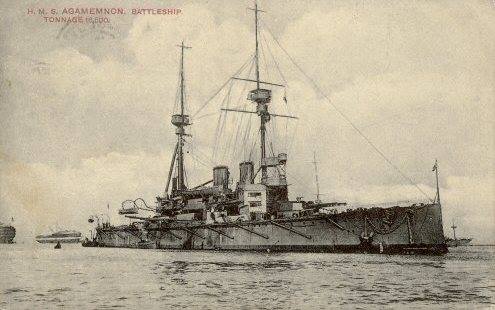 Today in Gosport’s Past:-on 1 March 1927, Britain’s last pre-Dreadnought battleship was towed out of Portsmouth harbour to be scrapped by J Cashmore in Newport, Monmouthshire (now Gwent).

“Agamemnon” was the sister ship of HMS “Lord Nelson”, a class of just two ship, and the fourth Royal Navy ship to carry the name. Built by William Beardmore & Co. at Dalmuir, she was launched on 23 June 1906, and completed in June 1908. “Agamemnon” was the penultimate pre-Dreadnought to be built, “Lord Nelson” being the last, launched on 4 September 1906 and completed in October 1908. Commissioned at Chatham dockyard on 25 June 1908, she saw plenty of action during World War 1, particularly in the Dardanelles in 1915/16, and the Eastern Mediterranean in 1917/18.

In March 1919 she returned to Britain, and was paid off in Chatham. From 6 December 1920 until 8 April 1921 she underwent conversion in Chatham for use as a target ship – not to be sunk, but to gauge how various shells, gas, etc might affect aspects of armour & so on. Although a crew of 153 were assigned to the ship, none were ever on board when tests were carried out, as the conversion involved radio control, so the ship could be controlled from somewhere safe. She continued in this role at Chatham, then Portsmouth, until replaced by HMS “Centurion” in December 1926, and was towed away for breaking up 89 years ago today.